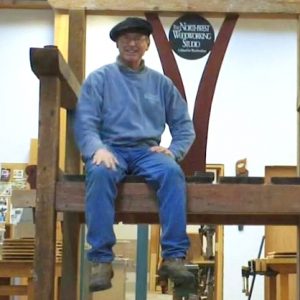 Gary Rogowski, the Director of The Northwest Woodworking Studio, opened the doors of his shop to offer classes to the public in 1997. As a teacher and builder of fine furniture in Portland since 1974, he has a wealth of information and knowledge to share with others. His goal in opening the Studio was to create a place where people could build work that was well designed and well made. Furniture that had honesty to it and soul. As Director and teacher, Gary focuses on traditional hand tool techniques but emphasizes contemporary design strategies. This combination offers his students tremendous creative leeway as well as the skills to build these designs. Gary has spent most of his life in Portland having migrated from Chicago to attend Reed College. He earned a degree in literature but found a career in woodworking more to his liking. His work has made its way into shows and galleries throughout the country including the Contemporary Crafts Gallery, Artquake in Portland and The Real Mother Goose. He participated in the Table Lamp and Chair Show series, had a piece in the Oregon Biennial at the Portland Art Museum, and was the recipient of an Oregon Arts Commission Crafts Fellowship. He has worked with clients for both private and public commissions including work for Temple Beth Israel, St. Juan Diego, the Oregon Forest Service, and the Oregon State Archives. Gary has established himself as a force within the woodworking community. Not only has he has been building furniture since 1974, he is also frequent contributor to a number of woodworking magazines. His acclaimed book The Complete Illustrated Guide to Joinery was released by Taunton Press in 2003 and still remains a valuable resource for woodworkers. Other publications include the DVD Router Joinery and a number of videos on Mortise and Tenons, Plywood Drawers, and Router Joinery.
Upcoming Classes
Build Along Session: Craft Style Mirror Frame
Gary Rogowski | 2022-07-16

Register Now! Call 503-284-1644 or click the Buy Now link on the class page to hold your place for these great Classes, Workshops, and Lectures!